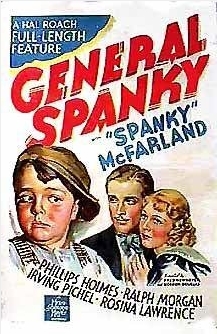 Someday I must actually read about the Civil War to find out if slaves were all ecstatically happy and sang spirituals all day long, as depicted by Hollywood films of the '30s.  Then I must read about Hal Roach to discover why he thought a story set in the Civil War would be a good vehicle for Our Gang's first feature film.

Indicative of how dull GENERAL SPANKY is, I had actually seen it once before and yet viewing it again, I did not recall seeing a single scene or remember a single gag from my first viewing.  It is not a badly made film, and on production values alone, it stands up to any of Laurel and Hardy's operettas.  But when you leave an Our Gang film thinking "nice production values", it's a bad sign.

The film is well titled, as Spanky McFarland gives the best performance.  If I were to compile a list of the most talented child actors in film history, Spanky would be right up there near the top of the list.  But he is not so good that he can carry an entire feature by himself, even with the aid of Buckwheat and Alfalfa, the only other major gang members in the cast.  (Porky is supposedly in there somewhere, but I didn't spot him, and Darla is missing all together).  The adult cast is unimpressive.  Rosina Lawrence is fun to watch when she gets to play against Laurel and Hardy or Our Gang, but here she has no chance to do anything except look beautiful while worrying and look beautiful while being happy.  Phillips Holmes, a John Carroll lookalike, plays Lawrence's love interest, a decent but boring man who essentially adopts Spanky. By default, Irving Pichel, as a weaselly gambler who joins the Yankee army, comes off the best, simply because he is the comic foil to the Gang's antics.

The film might have worked a little better if there was something approaching conviction in the direction, but neither Fred Newmeyer nor Gordon Douglas seemed to know what to do with this script.  The comedy scenes in particular lack any sort of spark, and too many scenes simply fade out, an indication of how unsure anybody was about how to link any of this material together.

When you mix in some uncomfortable elements concerning slavery, and a dubious comedy sequence in which Yankee soldiers unwittingly fire upon the Gang, GENERAL SPANKY is probably best left forgotten.  Which it will be by me within a week.