Because of the unusual number of Our Gang films released in 1937, the reviews will be split into two pages.

Originally to be titled Our Gang Follies of 1937, this musical short was instead named Reunion in Rhythm because of appearances by four ex-Our Gangers:  Mickey Daniels, Mary Kornman, Joe Cobb and Matthew "Stymie" Beard.  In the opening scene, each ex-member is paired with his/her rough equivalent in the new Gang: Stymie/Buckwheat (didn't they used to be siblings?), Joe Cobb/Porky, Mary/Darla and Mickey/Alfalfa.  After that, except for one gag by Mickey, the only time we see any of the old Gang is in cutaways during the new Gang's musical numbers.  They bring back Stymie and don't give him a single line?  I don't get it.

This being a one-reeler, there are only three musical numbers, but they are each nicely done.  The show opens with the baby-faced Darla singing "Baby Face" to the baby-faced Porky.  Spanky then leads a spiffy chorus line through "Broadway Rhythm".  The final act features Georgia Jean LaRue (no relation to Johnny LaRue, I expect) singing "Goin' Hollywood", leaving a broken-hearted Alfalfa to squeak and squawk his way through "I'm Through With Love".  In a running gag, Buckwheat keeps trying to get into the show by reciting "Little Jack Horner" in Buckwheatese at every available opportunity.

I have nothing against these Our Gang musicals, which are pretty nifty as novelties go.  But if they really wanted to make this a reunion, they should have brought back Mary Ann Jackson, Jackie Cooper and Dorothy DeBorba to do quadruple-takes at the sight of Spanky, the kid that once fed the Wild Man from Borneo everything in the refrigerator, now crooning "Gotta dance!" in a tuxedo and top hat.

STORY:  Butch Rafferty, the new tough kid in town, is pitted against Alfalfa in a boxing match.

Up to this point, Gordon Douglas's shorts have been nice, but except for Pay As you Exit, they were really nothing to get excited about.  But this one is a ten-minute gem from beginning to end.  It reintroduces former Our Ganger Tommy Bond as a new character, Butch, the toughest mug in town, and immediately establishes him as the guy who will menace Alfalfa for eternity.  Glove Taps also explores a reoccurring theme in the Spanky and Alfalfa relationship, that of Spanky as "the brains" of the team, coming up with plans that Alfalfa has no chance of executing with any skill.  When Butch determines that he is going to fight Alfalfa, Spanky sets up a boxing match between them and "trains" Alfalfa while hardly lifting a finger himself.  There are several fine gags throughout the film, including Alfalfa being knocked out by Buckwheat and dreaming of traipsing through a field of daisies in a toga, apparently what boxers dream of when they are down for the count.

Buckwheat and Porky are now the Spanky and Scotty of their generation.  With every new turn of Spanky's master plan for Alfalfa, the two look at each other and shake their heads, knowing that the whole enterprise is doomed to failure.   In the end, it is up to them to win the day by knocking out Butch on their own.

Tommy Bond, usually one of the background gang members in the mid-thirties films, whose only claim to fame before this film was a Tom Waits-ish rendition of "Friends, Lovers No More" in Mush and Milk, plays Butch like every Warner Brothers tough guy rolled into one.  Bond would only appear as Butch a handful of times before the end of the Roach years, but is so good in the role, he makes Butch one of the classic Our Gang characters, right up there with Chubby, Farina, Stymie, Spanky and Alfalfa.

In 1936 and 1937 was a year where Hal Roach's two main composers, Marvin Hatley and LeRoy Shield, wrote a great deal of new music for various features that were then used in the short films, and Glove Taps features a wall-to-wall soundtrack of background tunes old and new by these two under-rated musical masters. Their happy little tunes can make a fair short better, and make a great short like Glove Taps ever greater.

ALL RASCALS GREAT AND SMALL

Darwood Kaye makes a fleeting appearance. He would show up in the next short as Waldo, yet another memorable character introduced in these later years.  Jerry Tucker is still around , as is Donald Proffitt... whom I still can't identify!

And the Alfalfa-Darla Chronicles begin. 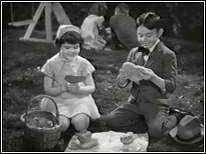 What makes the screen relationship between Alfalfa and Darla work so well is how well the actors Carl Switzer and Darla Hood mesh with each other.  According to the Our Gang book by Maltin and Bann, Darla Hood was actually a little frightened of Alfalfa (she was more fond of Spanky McFarland), but on screen, there is no evidence of this.  They work perfectly together; Alfalfa's awkwardness is perfectly convincing, Darla's coyness completely believable.

Hearts are Thumps gets the relationship off on a fun note, with Alfalfa picnicking with Darla during school recess.  Unbeknownst to either one of them, Spanky has replaced the Swiss cheese in his sandwich with sliced soap and the cream in his cream puff with liquid soap.  When he objects to the taste of the sandwich, all it takes is for Darla to suggest she could find some other boy to eat lunch with, for Alfalfa to scarf down both the sandwich and the cream puff.   This leads to a beautifully done finale where Alfalfa sings "Let Me Call You Sweetheart" as bubbles float out of his mouth.  The animation here is wonderful, as are the kids pantomimed reactions to non-existent bubbles that would be added later.

Perhaps inspired by this short, Laurel and Hardy would reprise both the animated bubbles and the song "Let Me Call You Sweetheart" for their 1938 feature SWISS MISS.

Darwood Kaye makes his first real appearance as Waldo, the bookish member of the Gang.   One wonders why they felt the need to rename him "Waldo" when Darwood would have been a perfect name for the character.

STORY: The Gang plan an "epidemic" to close down the school.

Although Three Smart Boys is sometimes remembered as a short containing several racist gags, nothing could be further from the truth.  In order to fake illness, Spanky and Alfalfa paint black dots on their faces, to approximate measles.  When they try the same on Buckwheat, they find the dots do not show, so they opt for white dots instead.  The gag is not about the color of Buckwheat's skin but about the innocence of Spanky and Alfalfa.  To think that black dots would fool a doctor is bad enough; to compound it by thinking white dots on Buckwheat would do the same is what makes it funny.  These are kids being kids.

To get a note to confirm their epidemic, they go to a veterinarian; apparently Miss Lawrence - or is it Miss Jones now? -  hasn't gotten around to teaching kids how to read yet.  Through perfectly reasonable plot complications that are carefully laid out, Alfalfa and Spanky soon think that to cure Buckwheat, the doctor had to turn him into a monkey.  In reality, Buckwheat is hiding in another room, having been scared by several of the vet's patients, and what Spanky and Alfalfa actually overhear from the examination room is a conversation about how to cure a small simian patient using "monkey serum".   There isn't a single element of the story, the dialogue or the gags that resembles the offensive "I wish Cotton was a monkey; all he needs is a tail" attitude of A Lad An' a Lamp.

Although these one-reel shorts lack the wandering nature of some of the best Our Gang shorts, you have to admire them for their economy.  Within the first minute, the situation has been set up: Miss Lawrence needs a day off to attend a wedding but the school's superintendent will not close the school unless there is an epidemic.  In a Robert McGowan film, it might have taken ten minutes just to get to this point.  Of course, those first ten minutes would still be filled with classic stuff, but those days were over.  The Gordon Douglas years were all about setting things up quickly, executing the gags, and concluding things properly. 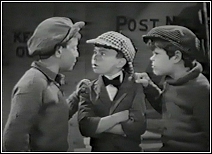 STORY: Spanky and Alfalfa seek revenge on Butch and Da Woim for stealing Buckwheat and Porky's marbles and hitting them in the faces with tomatoes.

Another beautiful mini-comedy that not only exploits the personalities of three separate Our Gang duos, but also contains some of the series best dialogue, half of it unintelligible:

ALFALFA: Do you promise to tell the truth, the whole truth and everything but the truth?
BUCKWHEAT: I do.
ALFALFA: Tell the Judge what happened.
BUCKWHEAT: Ella two duys took ma mobbles, hey, an two duys ibis imma base mit bomatas.  Innit he?
PORKY: Yosh.

After Spanky translates this bit of Buckwheatese into English, Alfalfa goes to investigate and even invokes the word "bomatas" while interrogating Butch and Da Woim.  From there, things get ugly, as Spanky and Alfalfa, dedicated to righting wrongs and protecting the weak, at least for this short, smack Butch and Da Woim with tomatoes and spend the rest of the short trying to escape the Wrath of Butch.  If that means ruining a local dance recital in the process, so be it.  Revenge is a dish best served in tutus and tights.

STORY: Spanky and Alfalfa run away from home, Buckwheat and Pork tag along.

A short that is more charming than funny, Roamin' Holiday has a pleasant rural setting not unlike that found in some of the earliest Our Gang shorts.  Adults Otis Harlan and May Wallace, as two country storekeepers, add to the feeling of nostalgia, especially Wallace, who frequently played Our Gang mothers in the early days.  The short contains few real gags, but what are there are winners, including the shot of Alfalfa's younger twin brothers - just imagine!

In Darla's fleeting appearance in this film, she seems to be cast as Spanky's sister.   If somebody ever charted an Our Gang Family Tree, it would be more like a Family Jungle.