Because of the unusual number of Our Gang films released in 1937, the 1937 reviews will be split into two pages.

STORY:  When a storm breaks out, the Gang has to spend the night at Darla's house, much to her father's consternation.

Night n' Gales is one of those Gordon Douglas shorts that is so packed with good stuff, it's hard to believe it is only ten minutes long.   Johnny Arthur scores again in his second Our Gang short, playing Darla's father, who has to sit through multiple rendition of "Home Sweet Home", sung by the Gang in four-part disharmony.  A sudden thunderstorm forces the kids to stay at the Hood home, sleeping with Arthur in the film's best scene.  Most of the fun comes from Arthur, but the Gang has some superior dialogue too.

"Junior", played by young Gary Jasgar, was basically a visual joke.  Although he can sometimes be seen smiling and laughing, his normal face is a blank, emotionless stare not unlike Buster Keaton.

MR. HOOD: I'd rather sleep with a bunch of porcupines!
ALFALFA: Where you gonna find a porcupine this hour of the night?
MR. HOOD: Oooooh!
ALFALFA:  By the way, what is a porcupine?
SPANKY: Aw, you tell him, Buckwheat.
BUCKWHEAT: Oh, Porky, you tell him.
PORKY: Oh, I don't know.

In a somewhat disturbing gag, Junior is accidentally locked in a refrigerator for a few minutes.

STORY:  When Butch vows to beat up Alfalfa, Spanky cooks up a scheme to make him believe Alfalfa busted his leg.

A short and sweet one-reeler that continues the ongoing story of Alfalfa and his tormentor Butch.  One of the few shorts that paint Butch in more than a single dimension, Fishy Tales shows him to be forgiving of an Alfalfa transgression (at first, at least) and later sympathetic over Alfalfa's supposedly "dislokated" shin, offering to run and get a doctor.  Dumb as dirt, yes, but forgiving and sympathetic.

The one thing that mars this short a bit is an occasionally overplayed performance by Alfalfa, who can clearly be seen "acting" rather than reciting his lines in a believable manner.

STORY:  Butch threatens Spanky with bodily harm if he allows Alfalfa into a radio contest.

Okay, we're asked to accept an awful lot here.  First, that the Gang would build their own elaborate Voice Studio dedicated solely to the promotion of Alfalfa's crooning career.  Second, that Butch is a violin prodigy.  Third, that the radio talent contest starts immediately after Butch leaves the premises, even though neither he nor Alfalfa had even begun heading down there.  All of this patented phoniness simply to get to a very memorable ending in which Alfalfa's rendition of "Just An Echo (Yoo Hoo)" is ruined by a frog lost in his shirt.  However, what I said before about these shorts holds true - they are so quick, they are sometimes beyond criticism.  Everybody does their job, there are a few laughs and the ending is one that everyone who grew up watching the Little Rascals on television remembers fondly.  In fact, here's a tip:  Want to find Little Rascals fans at random?  Go someplace fairly crowded  - a restaurant, a bank, a department store - and sing "Just an echo, yoo hoo!".

The people who sing "Ribbit Ribbit" in reply are the Little Rascals fans.

STORY:  When Alfalfa returns from military school, his tall tales to Darla about his football prowess catch up to him.

A likable film that manages to boil every college football picture ever made down into ten minutes.  But where is Butch?  There are three tough guys in this film, including Sidney "Da Woim" Kibrick, yet Butch is not in the cast.  My guess is Tommy Bond was busy on other films (he can be seen in Laurel and Hardy's classic BLOCK-HEADS), because he does not return to Our Gang until Came the Brawn, released in April of 1938.

STORY:  When Alfalfa is named president of The He-Man Woman Haters Club, he must retrieve a love note from Darla before the Gang finds out about it.

Our Gang films were now threatening to become more professional and polished than funny.  That is not to say they weren't entertaining, but the emphasis on setting up a plot and resolving it within ten minutes sometimes left the writers little room for many gags.  Nevertheless, Mail and Female is something of a classic, what with The He Man Woman Haters Club rearing its head for a second time, plus Alfalfa dressing in drag to fool Spanky and the Gang.  A score featuring high-quality background music from recent Laurel and Hardy features helps out.

The first Our Gang two-reeler since 1936's Arbor Day, and the last two-reeler released by Hal Roach.  It is the best of the three "Follies" films, probably featuring a bigger budget than Our Gang Follies of 1936 and Reunion in Rhythm combined. 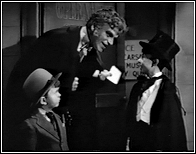 Helping make this film superior to the other musicals is character actor Henry Brandon, known to Laurel and Hardy fans as the evil Silas Barnaby in BABES IN TOYLAND.  In Follies, Brandon plays an opera company impresario who is amused by Alfalfa's singing of "The Barber of Seville" and jokingly signs him to a meaningless contact that will become valid in twenty years.  When Alfalfa dreams of life in the future, Brandon shows up again as a villainous version of the same impresario, wielding power over Alfalfa and forbidding him to sing for anybody else.  Brandon never became a big movie star, but his list of villainous credits is impressive.  After establishing himself with his classic portrayal of Silas Barnaby, Brandon would go on to play Fu Manchu in a 1940s movie serial, and the Indian Scar in John Ford's classic THE SEARCHERS.  He would do much acting on television, appearing in what seems like every western show ever made in the '50s as well as showing up on such popular shows as Get Smart, Night Gallery, Little House on the Prairie and Murder She Wrote.

The musical numbers are glossier than in the previous Follies shorts, and the whole film has a grandeur rarely seen in other Our Gang films.  Yet the emphasis is still on the Gang.  With the exception of his rendition of "Learn to Croon", which I find unlistenable, Alfalfa Switzer gives one of his best performances as the headstrong crooner who would rather sing Rossini than Crosby.  He also proves himself capable of taking multiple tomatoes to the face without flinching.   As always, Spanky is the perfect master of ceremonies, and even Darla gets a few laughs with her repeated boasts of a singing career that makes her "hundreds of thousands of dollars!".  Among the production numbers, Georgia Jean LaRue comes off best with "That Foolish Feeling", and Darla, Buckwheat, Porky are fun to watch in the charming (and occasionally out of tune) "The Love Bug Will Get You If You Don't Watch Out."