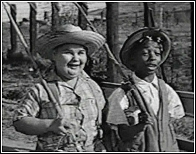 STORY:  Stymie, Dickie, Wheezer and Uh-Huh play hooky, and are taught a lesson by the truant officer.

An exercise in nostalgia, Fish Hooky is not a great Our Gang film, but a likable one thanks to the stunt-casting of four former Gang members:  Mickey Daniels, Mary Kornman, Joe Cobb and Farina Hoskins.  It is Joe and Farina who convince the four boys to play hooky, with Joe writing out the phony notes according to each Gang member's specifications.  Thus, Wheezer's plea to add a broken arm in the note to make it fancy winds up in the note as "He also broke his arm to make it fancy."  Former silent Gang members Mickey and Mary are now the truant officer and the school teacher.

I'm always a sucker for any old film that takes place in an amusement park, and this one features footage of a park at the Santa Monica Peer.  Unfortunately, before the four "fish hooky" players can ride any rides, Officer Daniels chases them away.  There is a tantalizing moment where it seems they are going to try and lose him in the Fun House, but even that gets nipped in the bud.  However, Daniels chasing the truant gang members through the park has the energy of an old silent comedy, and is partially filmed at silent speed, helping give the entire film a nostalgic atmosphere.

Uh-Huh was a gimmicky and short-lived character whose standard reply to any question was "UH-huuuuuh".

Miss Crabtree's name is mentioned in the dialogue.  And Our Gang fans everywhere bow their heads in remembrance.

STORY:  Spanky babysits for the gangs many little brothers and sisters.

An intriguing idea, and funny in spots, the success of Forgotten Babies depends on how long you will tolerate watching babies from 80 years ago being cute.  Maybe I am just getting older, but these days, I find myself worrying about that little guy at the top of the stairs, or that little girl who topples off a stool and hits the floor.

The second reel finds the babies, bored with Spanky's Tarzan stories, systematically dismantling everything in the house.  At least they assure us that the next generation of Our Gang will be just as destructive as all previous generations.

THE KID FROM BORNEO 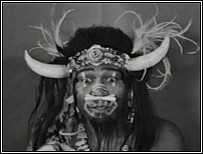 STORY: Dickie's Uncle George is coming to town, bringing with him Bumbo, "The Wild Man from Borneo".  When the Gang mistake Bumbo for Uncle George, things truly get wild.

Almost universally hailed as the wildest and funniest of all Our Gang shorts, and I am in no position to argue.  It certainly has the most energy and pulls out all stops to provoke laughter.  The ridiculous yet believable premise alone marks it as one of the most unique Our Gang shorts ever.

Yet, despite all the running around and screaming in this short, the funniest scene features Spanky, standing on the kitchen counter, coming face to face with Bumbo, and using his considerable wits to escape what he thinks will be certain death.  In truth, Bumbo is as gentle as they come, but he loves to eat, and his constant cries of "Yum yum - eat 'em up!" have convinced everybody that he is a cannibal.  Thus, after trying to engage in casual conversation ("How are things in Borneo?"), Spanky begins to feed Bumbo everything in the refrigerator, including a string of sausage, half a bologna, hot sauce, vinegar and a jug or port wine ("I don't know what this is, but let's see ya drink it!").

The chase inside the house that concludes the film is as wild as Bumbo himself and includes some nice special effects shots where Stymie's feet literally turn backwards, and roman candles ricochet off walls and straight into Bumbo's butt.  The chase is so well done and filled with such good slapstick, it is funny in spite of the fact that Bumbo is merely an overgrown kid himself and really undeserving of all the punishment he gets.

Politically incorrect as it may be, The Kid from Borneo marks the beginning of a new string of superior Our Gang films after a lengthy transitional period from Spanky to Forgotten Babies that had many up and downs.

The Kid from Borneo was often cut for television for obvious reasons.  Bumbo is, of course, a black man, and is portrayed as a raving lunatic idiot child.  Line's like "He looks like a gorilla ape!" would be pounced upon today.  Bumbo's skin color even confuses Stymie until Dickie innocently explains "Mom says he's the black sheep of the family."

STORY: Things are bleak for the Gang at Bleak Hill Boarding School until Cap gets his back pension.

A loose and plotless mixture of Our Gang elements old and new, Mush and Milk is not as wild or funny as The Kid from Borneo but just as delightful.  It hearkens back to the melodrama of shorts like Dogs is Dogs and Helping Grandma and the schoolroom vaudeville of School's Out and Readin' and Writin', while pointing the way toward the talent show shorts like The Lucky Corner and the various Our Gang revues.  In that way, it may be the most representative Our Gang film ever.

Bleak Hill is run by Cap and his wife.  Gus Leonard plays ol' Cap, one of the sweetest guys the Gang ever knew.  He promises them that when his back pension comes in, he will take them all away from the boarding school, but in the meantime, he does his best to teach them subjects like geography, leading to the usual bad puns from the gang.   After Uh-Huh uses the word "Isthmus" in a sentence thusly - "Isth mus be my lucky day!", Spanky admits "That's not so good" and Cap chucklingly agrees and eventually turns the rest of the class day into a talent show.  Tommy Bond scowling his way through "Just Friends (Lovers, No More)" is the absolute highlight.  Typical of the looseness found on Hal Roach's "Lot of Fun", Tommy and studio composer Marvin Hatley were having some fun in the studio one day with this song, and Roach liked it so much, he decided to let Bond sing it in the film.

Cap's wife, as played by Louise Emmons, is the nastiest, ugliest, most frightening Our Gang villain ever, forever screaming like a witch and threatening to thrash the kids with her whip.  No wonder Cap wants to get away as soon as that pension comes in.

And it does come in, the news being relayed by phone by none other than Jimmy Finlayson, most famous for his work with Laurel and Hardy.  Not surprisingly, he finds talking to young Spanky just as aggravating as trying to hold a conversation with Stan or Ollie.  Spanky's performance in this film reveals that in just the few months from Fish Hooky to Mush and Milk, he has developed from a cute infant to a confident young tyke who could handle all the dialogue you could throw at him.  He is so good, the next two films, Bedtime Worries and Wild Poses, would be virtual solo vehicles for him.

Mush and Milk marks the farewell of two veteran Our Gangers and one relative newcomer.  At "eight years of old age", Bobby "Wheezer" Hutchins (who can hardly be spotted in the film at all) and Dorothy DeBorba would both essentially retire from movies after this film.  Dickie Moore would go on to teen stardom and in later years would pen the fun and informative autobiography Twinkle Twinkle, Little Star (But Don't Have Sex or Take the Car).

"You kids put that milk on your mush and eat it - aaaaauuughhhhh!"

With several prominent cast members members now gone, the Gang was boiled down to Spanky and Stymie, with several generic kids whose only purpose seemed to be filling up the screen.  Before any new "stars" were added to the team, there seems to have been an attempt to see if Spanky could carry the series by himself.   Bedtime Worries is a gentle comedy that pairs Spanky with the comedy team of Gay Seabrook and Emerson Treacy, who can best be compared to Gracie Allen and George Burns.  The idea works well, as Spanky drives his father Treacy to distraction with his endless questions, and mother Seabrook drives Spanky and father crazy with her inane answers.  The three performers display a wonderful chemistry in this and the next film, and it is a shame that, for whatever reasons, the idea was dropped.

Spanky McFarland's portrayal of a young boy afraid of sleeping alone is right on the money, bringing back memories many of us have, yet he makes it funny too.  After pestering his father for a drink of water, yet only taking a sip, he unleashes a classic reply:

DAD: I thought you were thirsty!
SPANKY: Nope, I just wanted to wet my whistle.

Much of the humor of Spanky's character in these years was based on his use of popular phrases more likely to be used by adults, such as the above or the equally classic "Don't rush me, big boy" from later films.  There are clever touches in the dialogue of Seabrook and Treacy too that make them feel like a real married couple with a history behind them.  At the mention of "Santy Claus", father Treacy casually tosses out the line "Tell him I don't want any more socks and ties", directed at mother Seabrook.

Jerry Tucker and Georgie Billings had been in the series before, but with Wheezer, Dorothy and Dickie now gone, they have been promoted to prominent gang members, and thus, I classify this film as their official entry into the series.  Or should that be spelled "Ofishul?"

STORY:  Spanky is afraid to have his picture taken. 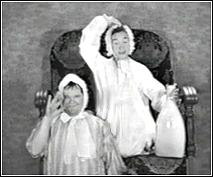 A continuation of the experiment begun in Bedtime Worries, Wild Poses is a funnier film, with more raucous slapstick and a deliciously fruity performance by the always reliable Franklyn Pangborne as a professional photographer.  Like many a Laurel and Hardy film, Wild Poses is based on a single situation - Pangborne attempting to take Spanky's picture - yet somehow, they never seem to run out of gags and variations, especially with the Gang (why are they there?) accidentally sabotaging Pangborne's every move.

Seabrook's inane patter is funny but sometimes a little too much, but even this is used in funny ways.  When Treacy mentions that Pangborne must have a lot of patience, Seabrook thinks that means he takes pictures in the hospital, to which Treacy answers, through a clenched smile, "I have lots of patience too."  Later on, after another bad gag, he has had enough and unleashes a weary "Oh, shut up!".

Pangborne gets a lot of mileage out of his face, his voice and his reactions to being repeatedly socked in the nose by Spanky.  When he attempts to show Spanky how to smile, and poses with an unbelievably asinine expression, Spanky asks "Hey, Pop, are you seeing what I'm seeing?"

Wild Poses is a great Our Gang film, but is probably more famous for the opening cameo featuring Hal Roach's most famous stars Stan Laurel and Oliver Hardy, pictured here in a composite shot.*  In a shot that lasts no more than ten seconds, they pose as babies fighting over a bottle while their theme song "The Dance of the Cuckoos" plays on the soundtrack.  "The Boys" made similar gag appearances in other Roach films such as Charley Chase's On the Wrong Trek and the Thelma Todd - Zasu Pitts comedy On the Loose.

Wild Poses was released in late October 1933.  With Spanky out on loan to other studios, the next Our Gang film would not be released until March of 1934, at which time there would be several new cast members and a new director.  Robert F. McGowan, who helped create the series and had been directing the films since the silent days, would step down and be replaced by Gus Meins.