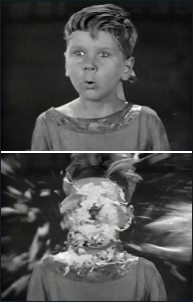 STORY:  The Gang puts on a play called The Gladiator's Dilemma.

No more or less amusing than watching your own kids in a school play, Shivering Shakespeare asks us to be entertained solely by the Gang forgetting their lines.  It's fun, but it's not enough.  Still there are good signs.  Jackie, Chubby and Mary Ann (or "Mariannicus", as she's known here) are all learning how to get laughs with their line deliveries.  Jackie Cooper has also learned how to take a pie in the face without flinching, something of a required talent for just about anybody on the Hal Roach lot.

Pies?  Oh, yes, there will be pies.  Lots of them, in the strangest pie fight you'll ever see.  Filmed partially in slow motion with no sound, it's more "funny strange" than "funny ha ha", but thanks to the over-cranking of the camera, it is fascinating for people interested in the physics of pies hitting faces.

If you look closely, you might think that Buster Keaton is making a cameo as a recipient of one of the pies.  It is actually his brother Harry, showing up in an Our Gang comedy for reasons lost to posterity.

Mickey Daniels, one of the most memorable Our Gang members from the silent years, appears in a cameo as the actor dressed in the lion suit.

Our Gang shorts often work better when they focus one one or two individual members rather than on the entire gang itself.  In The First Seven Years, the main story is all about Jackie Cooper, his love for the fickle Mary Ann, and his duel with his rival Speck.  This leaves Farina, Wheezer and Chubby to provide incidental business and gags from the sidelines.  The result is the most well-balanced Our Gang talkie so far.  The scenes where Kennedy the Cop gives Jackie advice on how to woo Mary Ann sound half ad-libbed, with Edgar Kennedy clearly having fun playing scenes with Jackie.

Oh, for the days when kids could settle their difference with real swords, which Mary Ann just happens to have in her house!

"Hey, wait a minute - I ain't washing my neck and ears for no dame!"

WHEN THE WIND BLOWS 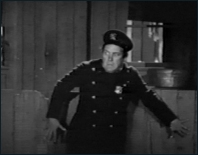 And just like that, we return to Small Talk and the theory that sound in and of itself is funny.  It's not, of course, but that doesn't stop When the Wind Blows from trying to convince use otherwise in a dozen different ways.  Running around and bellowing at the top of your lungs is not funny either, but Edgar Kennedy is asked to do that all through the film.  There are good things about When When the Wind Blows, especially the nonstop musical soundtrack that finally removes all that dead air from Our Gang films.  The film also has vim and vigor  to spare, thanks to the direction of James W. Horne, who helmed Laurel and Hardy's classic silent short Big Business and would later direct their most perfect feature WAY OUT WEST.

Interestingly, there are continuity threads left over from The First Seven Years, such as Wheezer still being Jackie's brother.  This doesn't necessarily make When the Wind Blows a better film, but it is worth mentioning in light of Our Gang's normal lack of interest in any kind of familial continuity.  Remember when Wheezer was Mary Ann's brother and everybody was in an orphanage?

When the Wind Blows may be all sound and fury, signifying nothing.  But its energy is a big, albeit noisy, step in the right direction.

Bear Shooters is a pleasant little film that starts off well, scoring with a gag where Chubby's weight  nearly tips over the Gang's makeshift wagon.  But once the action gets to the campsite, the gag writers run out of ideas and dig deeply into their Big Bag of Cheap Gags, relying on the old standbys of limburgher cheese, a bee's nest, a skunk and a man in a gorilla suit to produce laughs.

Leon Chaney, known as "Spud", makes his one and only appearance in an Our Gang comedy.  Somewhat older than the rest of the Gang, he didn't quite fit in, but he should get credit for adding one unforgettable line to the Our Gang Book of Quotes.  When asked why he can't go camping, he replies "I gotta stay home and grease Wheezer!"  See the film for context.

Listen closely during the first scene in which Spud fights with little brother Wheezer and you'll hear "Never Mind, Bo Peep" playing in the background, four years before Hal Roach would acquire the rights to Victor Herbert's musical Babes in Toyland and turn it into one of Laurel and Hardy's most popular films.  Also watch Wheezer pull off a blank camera stare worthy of both Stan Laurel and Oliver Hardy in the same scene.

STORY: The Gang hang out with Stepin Fetchit.

A Tough Winter features black comic Lincoln Perry, better known as Stepin Fetchit.  Fetchit's incurable but amusing laziness was considered a stereotype demeaning to blacks ("racially insensitive", as we would say today), and thus, like several other Our Gang films, A Tough Winter was pulled from circulation.

Banning the film from television deprived audiences of seeing a fairly funny comedian, as well as a good routine by the Gang in which Wheezer relays a radio recipe for taffy to Mary Ann, never realizing that the woman on the radio is actually giving out instructions for several dishes as well as reading commercials.  Thus, the ingredients keep getting weirder - raisins, Tabasco sauce, chili peppers, even a box of Lux soap! The resulting "taffy" acts like industrial strength epoxy, which the gang manage to get all over everything in the house.

The film ends on some gags later revived by Laurel and Hardy in their final Hal Roach feature SAPS AT SEA.  When Stepin Fetchit goes down to the basement to check on the hot water, he manages to rearrange all the electrical connections in the house, leading to vacuum cleaners that ask "What number please?" and telephones that nearly suck Chubby's hair through the receiver.

STORY: Farina gets a job as a page at the big pet show, and promises that Gang they will win prizes if they bring along their own pets.

From the opening moments when newcomer Dorothy gleefully jumps into a mud puddle and Chubby uses chalk to keep track of how many times she's done it today, Pups is Pups just feels like Our Gang has suddenly found itself again.  On every level, it is better than any of the sound shorts that have come before, and marks the beginning of a remarkable run in which films like this were the norm and clunkers were few and far between.

Pups is Pups exudes a level of confidence not previously seen in the Our Gang talkies.  The kids are more sure of themselves, the editing is tighter and the camera angles are more creative.  More importantly, composer LeRoy Shield was called upon by Hal Roach to provide new music for all his films, and Pups is Pups is filled with these instantly catchy melodies that perfectly underscore the action.  It's not all about gags (Our Gang was never all about gags), it's more about simply allowing us to be a fly on the wall during a typical day in the life of the Gang, something Pups is Pups does perfectly.

STORY:  The Gang gets a new teacher. Miss Crabtree, a name that brings visions of horror, visions that thankfully don't live up to reality. 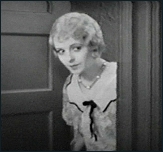 Perhaps the most evocative Our Gang film, one that brings back memories of simpler times, times that today we can hardly believe existed.  Teachers as lovely and sweet as June Marlowe.  Jackie hitching a ride with a complete stranger, Wheezer riding on the spare tire on the back.  Chubby's toreador outfit! (What mother would even think of sending a child to school dressed like that?).

Teacher's Pet also reminds us that there was once a little studio in Hollywood that would leave in an obvious mistake in the final shot of a film (Jackie's spoonful of ice cream falling before it reaches his mouth) in order to make it more real.  Or perhaps because Jackie Cooper didn't have another take in him.

It is fitting that Teacher's Pet is the first film to feature LeRoy Shield's beautiful theme "Good Old Days", which most people who grew up with these films on TV know as "The Little Rascals Theme".  One of his catchiest compositions, it is also his most nostalgic.

Teacher's Pet also introduces Matthew Beard, aka "Stymie", a favorite of just about anybody who loves Our Gang.  Roach often introduced new kids before he planned to phase out some older ones.  Thus, Stymie's appearance signals the eventual release of Farina, just as the introduction of Dorothy in the previous short  Pups is Pups meant that Mary Ann's days were numbered as the Gang's resident tomboy.  To paraphrase Peter, Paul and Mary, dragons live forever, but not so the little boys and girls of Our Gang.  They grow up, like all children, much too soon.

STORY:  The Gang is afraid that Miss Crabtree is going to get married and leave them.

A little less nostalgia and a few more gags go a long way. Like Laurel and Hardy's Tit for Tat, School's Out is a fine sequel that works better when viewed directly after its predecessor rather than as a standalone film.   The best scene, and one of the best scenes in all of Our Gang, comes when Miss Crabtree asks historical questions and the Gang members give her answers straight out of a joke book:

"Where was Washington?"
"First in war, first in peace, and third in the American League!"

This scene would later inspire a similar classroom routine in Laurel and Hardy's prison comedy PARDON US.

For the record, Bobby Young, who played the gangly Bonedust, was not exactly new to the gang, having appeared in several silent films.  This, however, was his first Our Gang talkie.  You gotta love that name: Bonedust.

Bonedust gets his quiz answers out of The Minstrel and Blackface Joke Book.