STORY:  When Wheezer is adopted, his sister Mary Ann and the rest of the gang from the orphanage invade his new mother's house, accidentally creating all sorts of havoc.

The first Our Gang talkie is talkie indeed, and noisy.  Because audiences were not used to sounds in movies, they would scream in laughter at hearing almost anything.  Most of the major gags in this film follow suit, such as a lengthy sequence in which Farina is confused by a whistling clock, a mechanical bird and a chatty parakeet.   The film is a historical curiosity, and not a bad one at that, but everybody is so uncertain of themselves, even Pete the Pup can be spotted looking toward the director for help.

STORY:  Joe accidentally takes the gang for a wild runaway joyride on his father's locomotive. 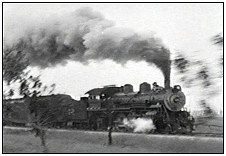 In the second Our Gang talkie, director Bob McGowan tackles the problems of sound by not worrying about them, a solution that makes for a visually vibrant film in which some of the dialogue is obscured by poor placement of microphones and extraneous railroad yard noise.  It doesn't matter.  Railroadin' is such a sunny, energetic picture, it would be just as enjoyable with the sound turned down and your favorite old jazz record playing on the stereo.  The runaway train sequence is superbly edited by Richard Currier (except for one illogically  mismatched shot) while creative camera work, thrilling tracking shots, and excellent back-projection work generate more excitement and suspense than you would expect in an Our Gang short.

STORY: Joe and Chubby, both keen on Jean, settle their differences in a boxing ring.

An unexpected step backwards after the triumph of Railroadin', Boxing Gloves is comprised of both sound and silent footage, with almost no attempt to blend the elements together with anything resembling movie-making skill.  Much of the climactic boxing scene, which cries out for crowd noise, is completely silent, with nothing but hiss and crackle on the soundtrack.  Other early Our Gang shorts have a similar mix of footage but none are as awkward as Boxing Gloves.

Still, any film pitting Chubby and Joe Cobb against each other in a love rivalry has got to have some laughs.  Two fat kids running around ripping each other's pants?  Now, that's entertainment!

Jackie Cooper makes his Our Gang debut in this film.  One of the most talented child actors ever, he would soon become the series' leading man.

SMALL TALK
"We don't admit ladies here.  The sight of blood splashin' around makes 'em faint."
"Oooh... I'd like t' faint once and see how it feels!"

STORY:  The only thing that can rouse a lazy Farina into action is a Best Baby contest offering cash prizes.

It would take a few more films before the Rascals series would hit its stride, but in the meantime, audiences would have to suffer through almost completely empty films like Lazy Days, a twenty-minute exercise in making a comedy without comedy.  The adjective in the film's title refers not only to Farina's disposition but to the quality of gags.  Instead of developing the personalities of the kids, the writers resort to easy stuff like animal antics and elaborate mechanical devices.  Throw in Farina being turned into a black stereotype - he's lazy, but he loves his watermelon - and such unpleasantness as a baby crying for five straight minutes and a monkey being stung by a bee, and you've got an Our Gang comedy that deserves to be forgotten. 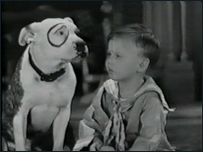 STORY:  Jealous of the attention his baby brother gets, Wheezer tries to sell him back to the hospital for a goat.

Bouncing Babies is slow and creaky, but it is saved by the natural charm of the young players, especially Bobby "Wheezer" Hutchins.   With his devilish looks and his scheming mind, he's just fun to watch no matter what other flaws the film may have.

The gags are hit and miss.  For example, it may be cute to watch Wheezer cooking pancakes, but his mistaking Plaster of Paris for pancake flour is not all that funny beyond the premise.  Laurel and Hardy could get away with gags like this because of the dynamics of the team:  Stan would be the one to mix the pancakes and make an earnest attempt to eat them, while Ollie would be the one to react to Stan's stupidity.  A gag setup like this needs a victim, somebody other than Wheezer to eat the pancakes. There are also cutaway shots of Pete the Pup and the all-purpose cat (hereby known as Generic the Cat) licking up the spilled batter, clearly show that although the story has Wheezer using Plaster of Paris, what is actually dripping on the floor of the studio is pancake batter.  Either that, or else the shots of both animals writhing in pain and dying later have been edited out.

But there is another gag in Bouncing Babies that Laurel and Hardy would have loved.  In order to cross the busy boulevard, Wheezer breaks light bulbs on the curb, causing every driver on the street to stop and check their tires for a blowout.   Although repeated once too often, the gag has the mass confusion element that Laurel and Hardy often exploited in their silent films, and is expertly filmed from a high angle.

Social services would have a field day with Wheezer's mother in this film.  They could have charged her with reckless endangerment of a child (and animals) by allowing him access to Plaster of Paris, matches and a stove.  There's also the matter of her leaving a hammer on the floor, in easy reach of a baby who uses it to bonk his older brother on the head, and allowing Wheezer to "run away" and cross the traffic-filled street by himself.  We won't even get into the whole spanking issue.  In the Our Gang world, Mom's punishment is much simpler - she gets a hurled Plaster of Paris pancake cracked over her skull.

STORY:  While the Gang digs for treasure in an old house, they are frightened by its bizarre occupant.

Essentially a haunted house story with the gang reacting to the strange behavior of Max Davidson, a popular silent movie comedian whose character was based on Jewish stereotypes.  His appeal in Moan and Groan, Inc. is limited, as he doesn't do much more than make strange faces and noises in an effort to scare the kids for no good reason except his own amusement.  Edgar Kennedy makes his first appearance as Kennedy the Cop, a bumbling but likable lug who seems to enjoy spending time with the kids.  Kennedy would be one of the few bright spots in these early days of Our Gang talkies.   The most memorable aspect of Moan and Groan, Inc. is the "Japanese handcuff", a novelty item that is essentially a small, woven tube that when placed on a finger is nearly impossible to remove.

Joe Cobb, Harry Spears and Jean Darling finished their tour of duty in Our Gang.  Cobb, who was replaced as "the fat kid" by Chubby, would return to the series in the late thirties for a handful of cameo appearances.